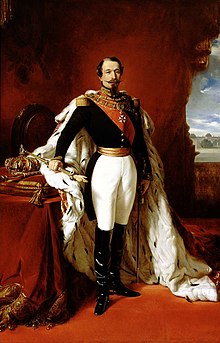 The nephew of Napoléon I, Louis Napoléon Bonaparte, became the President of France during the period of the Second Republic (1848-1852), and then founded the Second Empire ruling as its monarch, Napoléon III (1852-1870). At the 1870 Battle of Sedan his army was defeated and he was captured by the Prussians.

But this was not before leaving his mark. He gave French workers the right to organise and strike, women were granted the right to be admitted into a French university. He established modern agriculture in France, he modernised the French banking system, he expanded its railway network and promoted the building of the Suez Canal. But, perhaps most memorably, he appointed Baron Georges-Eugène Haussmann to reconstruct the heart of Paris.

Of direct interest to ultcult.com, he played a role in Impressionism. During his reign the Académie des Beaux-Arts dominated French art. The Académie preserved what it saw as traditional French painting, its content and styles. Historical subjects, particularly with religious themes were the most highly praised. Portraiture was considered the second-most important genre. Everyday scenes were considered too ‘everyday’ and classified as genre painting, third in its hierarchy. While landscapes and still life were ranked fourth and fifth. The Académie rewarded carefully finished images that had realism, with precise brush strokes that concealed the artist’s work.

The Académie ran an annual Salon de Paris where artworks were judged. It was not just the prizes and commissions that artists could garner from their participation, it was their opportunity to build their reputations, their ‘brands’.

One group, Frédéric Bazille, Claude Monet, Pierre-Auguste Renoir and Alfred Sisley, discovered that they were keen, despite the Académie’s strictures, to paint landscape and contemporary life rather than invest effort in historical or mythological subjects. They routinely met at the Café Guerbois on the avenue de Clichy in Paris. Their discussions were often led by Édouard Manet, whom the younger artists greatly admired. They were subsequently joined by Paul Cézanne, Armand Guillaumin and Camille Pissarro.

Instead of painting in a studio, these artists found that they wished to capture the momentary and transient effects of sunlight by working quickly, in front of their subjects, in the open air (en plein air). This resulted in a greater awareness of light and colour and the shifting patterns of a natural scene. Their brushwork became rapid and broken into separate dabs in order to capture the fleeting quality of light. This process, of painting on the spot, had already been pioneered in Britain by John Constable in around 1813–17 pursuing his desire to paint nature in a realistic way. This group sought to extend further the initiatives of the Realism movement of artists like Gustave Courbet, and the Barbizon School and artists like Jean-François Millet.

The Académie rewarded works that applied a restrained use of colour that was usually toned down even further by using a golden varnish. Perhaps exemplars of this style are found in the works of Alexandre Cabanel and Jean-Léon Gérôme.

During the 1860s, the Salon’s jury rejected around half of the works submitted by Monet and his friends, preferring those artists faithful to the approved hierarchy and style. In 1863, the Salon jury rejected Édouard Manet‘s The Luncheon on the Grass (Le déjeuner sur l’herbe) apparently because it depicted a nude woman with two clothed men at a picnic, that is, within a contemporary rather than an approved historical or mythical setting.

The jury’s harshly-expressed rejection of Manet’s painting frustrated his admirers, and the unusually high number of rejected works in that year disturbed many French artists. Napoleon III concluded that the public should have the opportunity to judge the works and prompted the establishment of a Salon of the Refused (Salon des Refusés) at the Palais de l’Industrie in Paris in 1863.

At this breakaway Salon The Luncheon on the Grass  received much positive attention, while remaining controversial. Among the other exhibitors were Paul Cézanne, Henri Fantin-Latour, Armand Guillaumin, Johan Jongkind, Camille Pissarro, Alfred Sisley and James Whistler.

This first Salon des Refusés attracted more visitors than the traditional Salon had achieved. Artists’ petitions for a further Salon des Refusés in 1867, and again in 1872, were denied. But they were mounted in 1874, 1875, and again in 1886, by which time the popularity of the original Paris Salon had declined, particularly those who were more interested in Impressionism.

In December 1873, the Salon des Refusés exhibitors and others founded the Cooperative of Painters, Sculptors, and Engravers (Société Anonyme Coopérative des Artistes Peintres, Sculpteurs, Graveurs). Its members were expected, by default, not to participate in the Académie’s Salon.

The Cooperative’s first exhibition was in Paris in 1874 and included the work of thirty artists, including Claude Monet, Paul Cezanne, Edgar Degas and Auguste Renoir.

However the works shown were greeted with derision with Monet particularly singled out for ridicule. Critic and humorist Louis Leroy wrote a hard-hitting review in the Le Charivari newspaper, entitled ‘The Exhibition of the Impressionists‘. Leroy declared that Monet’s painting Impression, Sunrise  was at most a sketch, and could hardly be termed as a finished work… …wallpaper in its embryonic state is more finished than that seascape. However, he had unwittingly provided the movement with its name.

Seven further exhibitions were held at intervals until 1886.

Other core artists of Impressionism were Camille Pissarro, Berthe Morisot and Edgar Degas. While  Edouard Manet was regarded by the Impressionists as their leader, he never abandoned his liberal use of black as a colour, which Impressionists avoided preferring instead to obtain darker colours by mixing – and he never participated in the Cooperative’s exhibitions and continued to submit his works to the Académie.