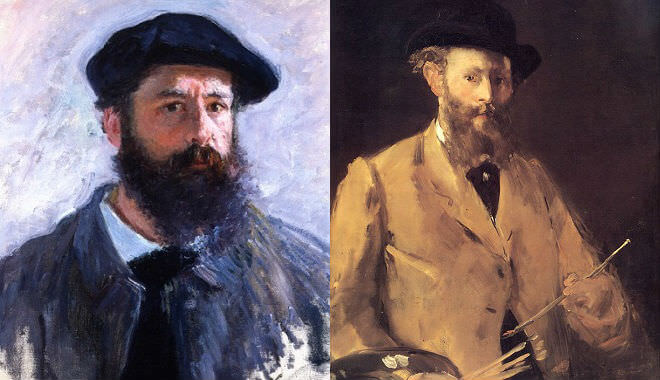 The similarity of their names, Manet and Monet, their similar beards, the fact that they were both Paris born, both lived in the 19th century, both significant early Impressionists, both marrying their model/muse – this all leads to confusion between these two French artists.

As we shall see Manet was born eight years earlier but died at age 51, while Monet lived to 86. This post will seek to show where their lives intersected and where their careers diverged.

Forward to Manet – to Monet – to Realism – to Impressionism
Back to ultcult.com home – to Art & Sculpture Index

Edmond Fournier, Manet’s uncle, encouraged him to pursue painting and took the young Manet to the Louvre to admire the great artists and their works. As a result, in 1841 Manet aged nine enrolled at a secondary school, the Collège Rollin (today’s Collège-lycée Jacques-Decour).

At the advice of his uncle, in 1845 (at age 13), Manet enrolled in a special course of drawing where he met his subsequent longterm friend, Antonin Proust, a journalist and politician who would become (in the 1880s) the French Minister of Fine Arts. [Proust would become embroiled in the Panama Canal Scandal of the 1890s, and, though acquited, shot himself in the head and died in 1905. He was not related to the writer Marcel Proust.]

From 1850-1856 (18-24 years old) Manet studied under the history painter and teacher Thomas Couture. Manet developed the habit, in any spare time, of visiting the Louvre and copying the masterpieces on display there.

Manet augmented this learning and practice from 1853-1856 with trips to Germany, Italy, and the Netherlands. At this time, he was apparently greatly influenced by the Dutch painter Frans Hals and the Spanish artists Diego Rodriguez de Silva y Velázquez and Francisco de Goya y Lucientes.

In 1856 Manet opened a studio, and adopted the current style of Realism as presented by Jean Désiré Gustave Courbet, he painted The Absinthe Drinker (1858–59) and other contemporary subjects such as beggars, singers, Gypsies, people in cafés, and bullfights.

Manet had two canvases accepted by the Paris Salon of 1861. The first depicted his mother and father, the latter debilitated by a stroke, and was not well receoived. The second was The Spanish Singer was said by some to be ‘slightly slapdash’ compared with the meticulous style of other Salon paintings, but had younger artists acclaim it as a ‘strange new fashion’. The painting was awarded a 2nd class medal.

Monet was raised in Le Havre, Normandy, he became interested in the outdoors and drawing from an early age. Although his mother, Louise-Justine Aubrée Monet, supported his ambitions to be a painter, his father, Claude-Adolphe, disapproved and wanted him to pursue a career in business. Monet was very close to his mother, but she died in January 1857 when he was just sixteen years old, and so he was sent to live with his childless, widowed but wealthy aunt, Marie-Jeanne Lecadre.

One sub-group of these, Frédéric Bazille, Claude Monet, Pierre-Auguste Renoir and Alfred Sisley, discovered that they were keen, despite the Académie’s strictures, to paint landscape and contemporary life, rather than invest effort in historical or mythological subjects.

They routinely met at the Café Guerbois on the avenue de Clichy in Paris. Their discussions here were often led by Édouard Manet, whom the younger artists greatly admired. They were joined on occasion by Paul Cézanne, Armand Guillaumin and Camille Pissarro.

Instead of painting in a studio, these artists wished to capture momentary and transient effects of light by working quickly, in front of their subjects, in the open air (en plein air). This resulted in a greater awareness of light and colour and the shifting patterns of a natural scene. Their brushwork became rapid and broken into separate dabs in order to capture the fleeting quality of light.

This process, of painting on the spot, had earlier been pioneered in Britain by John Constable in around 1813–17 pursuing his desire to paint nature in a realistic way.

A coming together, against the traditional

During the 1860s, the Académie’s Paris Salon jury routinely rejected about half of the works submitted by Monet and his friends in favour of works by artists faithful to the approved style.

In 1863, this jury rejected Manet’s The Luncheon on the Grass (Le déjeuner sur l’herbe) primarily because it depicted a nude woman with two clothed men at a picnic. While the Salon jury routinely accepted nudes in historical and allegorical paintings, they condemned Manet for placing a realistic nude in a contemporary setting.

The jury’s severely worded rejection of Manet’s painting appalled his admirers, and the unusually large number of rejected works that year perturbed many French artists. It was the presence of a nude woman among clothed men, having a picnic, that proved controversial and some even suggested it was obscene.

Manet himself jokingly nicknamed his painting ‘la partie carrée‘ (a party of four). Many thought it was a reference to the rife yet unmentionable prostitution of the day in the Bois de Boulogne in Paris.

However, after Emperor Napoleon III saw the rejected works of 1863, he decreed that the public be allowed to judge the work themselves, and the Salon des Refusés (Salon of the Refused) was organised at the Palais de l’Industrie in Paris.

While many viewers came only to laugh, the Salon des Refusés drew attention to the existence of a new tendency in art.

At this breakaway Salon The Luncheon on the Grass  renamed as Le Bain received much positive attention, while remaining controversial.

Manet was one of the first 19th-century artists to paint modern life, as well as a pivotal figure in the transition from Realism to Impressionism. This painting is considered by many as a departure point for Modern Art.

Artists’ petitions for a further Salon des Refusés in 1867, and again in 1872, were denied. But they were mounted in 1874, 1875, and again in 1886, by which time the popularity of the original Paris Salon had declined, particularly those who were more interested in Impressionism.

In December 1873, the Salon des Refusés exhibitors and others founded the Cooperative of Painters, Sculptors, and Engravers (Société Anonyme Coopérative des Artistes Peintres, Sculpteurs, Graveurs). Its members were expected, by default, not to participate in the Académie’s Salon.

The Cooperative’s first exhibition was held in Paris in 1874 ir showed over two hundred works of thirty artists, including Claude Monet, Paul Cezanne, Edgar Degas and Auguste Renoir. It attracted over 4,000 visitors.

However the works shown were greeted by some visitors with derision, Monet particularly singled out for ridicule. Critic and humorist Louis Leroy wrote a hard-hitting review in the Le Charivari newspaper, and entitled it as ‘The Exhibition of the Impressionists‘.

However between them, Monet and Leroy had unwittingly provided this movement with its name. The term Impressionist became recognised by the publicto denote a fresh and original vision. Despite the artists being a very diverse group in style and temperament, they were unified primarily by their independence and their rebellion against traditional approaches, so they too came to accept the name..

Seven further exhibitions were held at intervals until 1886.

Édouard Manet pursued both Impressionism and Realism. He most often worked in a studio rather than en plein air. Although he was regarded by the Impressionists as their notional leader, he never abandoned his liberal use of black as a colour (while Impressionists avoided its use and preferred to obtain darker colours by mixing).

He also never participated in the Impressionist’s exhibitions. He continued to submit his works to the Salon, where his painting Spanish Singer had won a 2nd class medal in 1861, and he urged the others to do likewise, arguing that “the Salon is the real field of battle” where a reputation could be made.

Manet differed from Monet by the high incidence of his inclusion of people in his canvases. He also used larger brushstrokes.

In April 1883, at the age of 51, Manet’s left foot was amputated because of gangrene caused by complications from syphilis and rheumatism. He died eleven days later on 30 April in Paris. He is buried in the Passy Cemetery in the city.

In 1883, Monet and his family rented a house and gardens in Giverny, a village in the region of Normandy in northern France, which provided him with a desired domestic stability.

There was a barn he could use as a painting studio, the orchards, lake and a small garden provided numerous natural areas for Monet to paint.

Monet’s second wife, Alice, died in 1911, and his oldest son Jean, who had married Alice’s daughter Blanche, Monet’s particular favourite, died in 1914. Their deaths left Monet depressed, as Blanche had cared for him. It was during this time that Monet began to develop the first signs of cataaracts. In 1913, Monet travelled to London to consult the German ophthalmologist Richard Liebreich. He was prescribed new glasses and rejected cataract surgery for the right eye.

Monet painting one of his water lilies series at Giverny

The next year, Monet, encouraged by Clemenceau, made plans to construct a new, large studio that he could use to create a ‘decorative cycle of paintings devoted to the water garden’. He would complete over 200 paintings in his water lily cycle. In total Monet would complete some 2,000 paintings across his lengthy career.

Forward to Manet – to Monet – to Realism – to Impressionism
Back to ultcult.com home – to Art & Sculpture Index 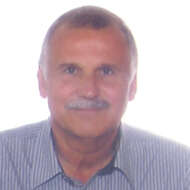 Can you name the artist? 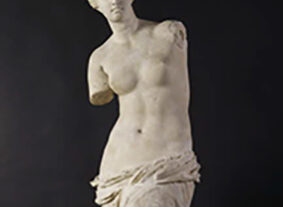 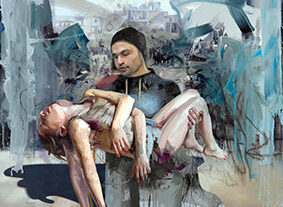